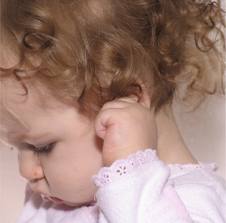 An infection or inflammation of the middle ear, otitis media often takes its form when infections that commonly cause sore throats, colds, or other respiratory problems spread to the middle ear. These types of infections can be either bacterial or viral and the disease primarily affects infants and young children.

Otitis media is the most common diagnosis recorded for children who visit an ENT doctor. In extreme cases, it may result in hearing loss in children. While otitis media is most commonly found in children and young adults, some adults may also be affected. This infection usually occurs in the winter and early spring months. Otitis media is a serious ailment, largely due to the severe earache and potential for hearing loss. It is also considered a serious infection because it can travel from the middle of the ear to nearby structures in the head, including the mastoid. It is incredibly important for you to be aware of the signs and symptoms of otitis media and contact your ENT doctor immediately if you are concerned you or your child may have a middle ear infection.

Otitis media typically occurs in children and young adults who have a blocked eustachian tube, which usually occurs during a cold, allergy, or upper respiratory infection. The presence of bacteria or viruses may lead to the accumulation of fluid behind the eardrum, which is what characterizes otitis media. A build up of pressurized puss in the middle ear then leads to a painful earache, swelling, and redness. In some cases the eardrum may rupture, allowing pus to drain into the ear. However, in most cases the pus and mucus remain in the middle of the ear, causing pain, infection, and difficulty hearing.

Otitis media can be difficult to detect due to the fact most children that are suffering from this disorder have not yet developed the proper speech and language skills to express what is bothering them. It is therefore very important for you to be aware of the following signs of otitis media and contact your ear, nose, and throat clinic immediately if you notice any of them:

Your ENT doctor will use an otoscope to assess the ear’s condition and check for redness or fluid behind the eardrum. Your ENT doctor may then request additional tests and prescribe one or more medications. Follow-up appointments are also very important and will allow your ENT doctor to assess the overall progress and determine whether or not the antibiotics have been effective.