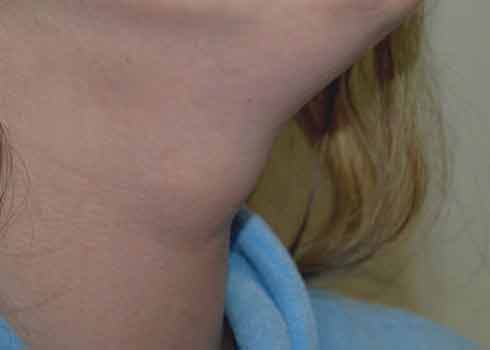 What is a thyroglossal cyst?

A thyroglossal cyst is a lump found in the upper central part of the neck between the chin and the voice box. The cyst moves with swallowing and when sticking the tongue out. It can appear in childhood and adolescence but occasionally also in young adulthood. It develops as a result of a persistent duct between the tongue base and the front of the neck, which serves as a descending pathway for the thyroid gland before birth.

Why does it need surgical removal?

A thyroglossal cyst frequently becomes infected with upper respiratory tract infections. If that happens it swells up and the skin over it becomes red. This needs initial treatment with antibiotics and if not removed subsequently it tends to recur.

Also, if it is allowed to remain in the neck in adulthood there is a risk of it becoming cancerous.

How is the operation done?

The operation is done either under a general anaesthetic. A small cut is made on the skin over the cyst and then with careful dissection the cyst is removed. The middle part of a bone in the neck called the hyoid bone also needs to be removed as the thyroglossal duct usually travels through it. If this part of the hyoid bone is not removed there is a very high chance of the cyst coming back. The skin is closed with appropriate sutures. Sometimes a small tube needs to be placed through the wound to allow drainage of secretions and blood. This is usually removed the day after the operation.

There is no significant pain after the operation but should there be any you could could take simple painkillers.

You should be able to return home the same day or the day after the operation.

What are the possible complications?

Complications are uncommon. Infection and bleeding are the commonest complications. There is also a risk of recurrence of the cyst but if the middle part of the hyoid bone is removed this risk is very small.