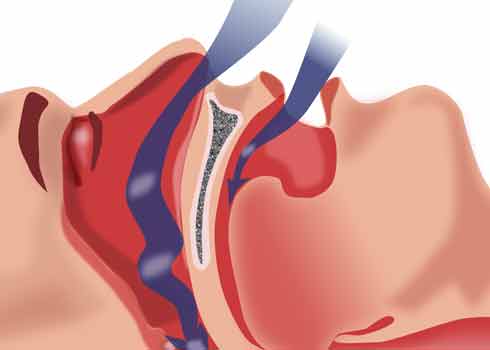 Sleep apnea is a common and under-diagnosed sleep disorder.  It causes repeated episodes of stopped breathing (apneic episodes) and startling or gasping for air during sleep.  People with sleep apnea frequently do not realize that they have it.  The consequences of untreated sleep apnea can be severe or life threatening therefore early diagnosis and treatment is essential.  Sleep apnea may be treated or managed with lifestyle changes, use of a breathing assist device at night, or surgery.

Sleep apnea occurs when breathing stops in repeated episodes during sleep.  Apnea means lack of breathing.  The majority of sleep apnea cases are caused by obstructions in the nose or throat that block a person’s breathing airway.  During sleep, the airway muscles relax and the airway closes or is blocked.Central sleep apnea is less common.  It is caused by a low blood carbon dioxide level.  Carbon dioxide is a powerful breathing signal and if it is too low, the brain fails to signal the lungs to breathe.

People may have sleep apnea and not be aware of it.  People with sleep apnea may stop breathing numerous times during the night and not fully awaken to realize it.  In many cases, a household member is the first to notice that a person snores loudly, stops breathing for periods of time, and gasps or snorts during sleep.  Daytime drowsiness, headache upon awakening, weight gain, depression, irritability, leg swelling, sexual dysfunction, and difficulty thinking or remembering may be signs of sleep apnea.  Sleep apnea can contribute to high blood pressure, and researchers suspect that up to half of all people with sleep apnea have high blood pressure.  Sleep apnea can contribute to stroke, heart attack, or death.

You should contact your doctor if you suspect that you have sleep apnea.  Your doctor will examine your nose and throat for structural abnormalities.  Your doctor may recommend a sleep study to help diagnose sleep apnea and determine its severity.

Treatment for sleep apnea depends on the cause and extent of the condition.  Treatment may include lifestyle changes, use of an air device, dental appliance, and surgery.  Some people may use more than one type of treatment.

Lifestyle changes may treat mild cases of sleep apnea and help reduce the number of apneic episodes for others.  Achieving and maintaining a healthy weight can help.  Even small weight loss amounts can reduce the amount of apneic episodes.  You should avoid using alcohol, tobacco, sedatives, or sleeping pills.  Additionally, it may be helpful to sleep on your side instead of your back.

Continuous positive airway pressure (CPAP) is the most common treatment for sleep apnea.  CPAP entails wearing a device over the nose during sleep.  The nasal device is connected to a small machine that creates airflow and gentle air pressure to keep the airway open.  CPAP is an effective way to treat sleep apnea.